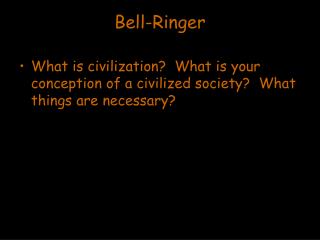 Bell-Ringer. What is civilization? What is your conception of a civilized society? What things are necessary?. The “Three Worlds” Before Columbus. Source: Ptolemy, 2nd cent. ''Map of the World.'' 1482. John Carter Brown Library, Brown University. Native American Societies. Bell Ringer - . how many days did the mayan solar year last? what was the round calendar? what was a chinampas?. ch 9: