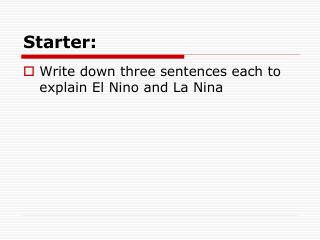 Starter :. Write down three sentences each to explain El Nino and La Nina. Human Factors. Aim: To understand the human factors that lead to an increase in hazard frequency. Recap . Starter #1 - . write down the 7 steps of the writing process. starter #2. explain in your own words why it is important

The Starter Generator! - Made by mike gershon – mikegershon@hotmail.com. if you want to make the slides whizz through

STARTER - . read task 4 in the assignment and think about the user requirements of the piece of software. produce a

Oral Interpretation - . discussion starter. “above all, the art of reading aloud should be cultivated” -alfred lord

Cognitive Psychology ~ Memory Starter Activity: How good is your memory? - . you are now going to take a memory test. at

Starter… - . write the title: “context of tkam” put these events into chronological order in your books: the year

Starter - . in your envelope you have a number of questions and answers about the usa characteristics and sporting ethos.