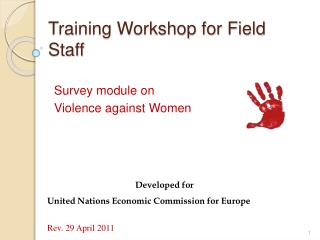 Training Workshop for Field Staff. Survey module on Violence against Women. Developed for United Nations Economic Commission for Europe Rev. 29 April 2011. I. Introduction to the Workshop. Goals of the workshop. To increase knowledge about gender based discrimination and violence Kiva Training for Field Staff - . collecting client waivers. introduction. at the end of this training, you should be

Training for Staff - . first aide training. 3. engagement with, and response to, specific local/national initiatives and

Training-cum-Workshop of Field Engineers - . 22 nd may to 4 th june, 2010. aim of the training. brief understanding on

ONE Training for Staff - Ultimate meal pattern throwdown. one training for staff. throwdown challenge. tackle your

Training Workshop for the PARCC Field Test in Massachusetts - . welcome from the department. welcome background agenda

Staff training - . introduction to a self-paced learning program. who is wbi?. wbi is the capacity development arm of