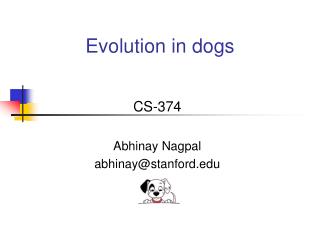 Evolution of the dogs - Ever wonder how your dog evolved? there are more than 350 different breeds of dog, each

Co-Evolution of Dogs and Humans - . what co-evolution means. simply means the mutual evolutionary influence between

Evolution of the dogs (teacher notes) - Ever wonder how your dog evolved? there are more than 350 different breeds of

Deafness in Dogs - Dog breeds with congenital deafness. reported in over 80 dog breeds ... do not totally breed away from

Perception in Dogs - . perception in dogs. there are lots of ways of understanding a dog and how their various parts

Dogs - . project 2. they live in towns , cities or farms . dogs are very friendly. where do dogs live ?. what are they

DOGS - . you will read poetry about dogs like gizmo, cardy , shadow and kasey. meet the dogs of my poem!. gizmo. shadow.

Dogs - . by tyler m. labs size. lab retrievers are a size dog they are friendly dogs weigh 55 to 80 ponds . labs body. a

dogs - . by anna logan. dog breeds. here are some dog breeds; a bulldog , a collie , dalmatians , poodles, an american

Dogs - . &quot;a life without a dog is a mistake&quot; ” (carl zuckmayer). “ women and cats will do what