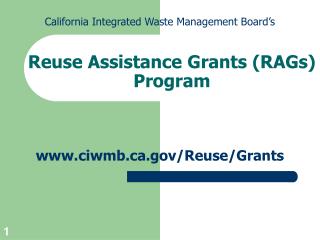 Software Reuse - . objectives. to explain the benefits of software reuse and some reuse problems to discuss several

Financial &amp; Grants Management: How to Stay in Compliance (and Out of Jail!) - . why know this stuff?. financial

Reduce, Reuse, Recycle - . by: jess groff, lisa klenk, and christa cox. what is reducing? lessening the amount of