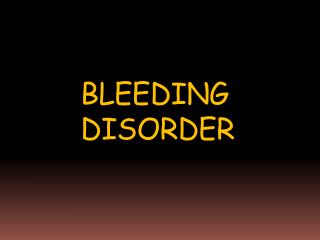 Bleeding Radiator - If your radiator is on, but the home feels warmer than it should, it is possible that there is

UGI Bleeding - . epidemiology of upper gi bleeding. bleeding from a source above the ligament of treitz 1 case/1,000

Bleeding Disorders - . meera shreedhara 8/25/08 . what is it?. a bleeding disorder is an acquired or inherited tendency

Anyone Can Have a Bleeding Disorder Lesson Plan - . learning objectives. i will understand the issues faced by