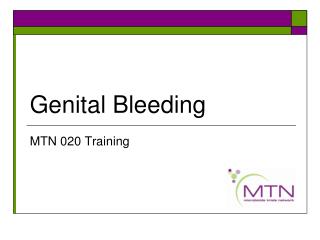 BLEEDING - . first aid eq: what are the 4 types of open wounds?. bleeding. open wounds – bleeding through the

Genital Herpes - . by: abbies and skyler. what is genital herpes? what is it caused by and how is it spread? . genital

GENITAL PROLAPSE - . objectives of the lecture. at the end of this lecture: the student should be able to define

Genital prolapse - . displacements of the uterus. the uterus is normally anteverted,anteflexed version: is the angle

Genital Warts - . also known as condylomata acuminata or venereal warts, is one of the most common types of sexually