Prediction on Time-Scales of Years to Decades - PowerPoint PPT Presentation 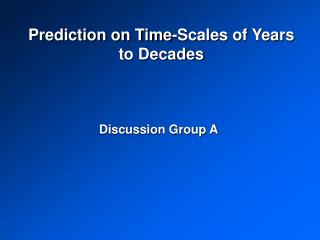 Prediction on Time-Scales of Years to Decades

Prediction on Time-Scales of Years to Decades

Dike A - What is the sequence of events that shaped this geologic setting?. dike b. dike a. fault 2. fault 1. today:

Hypothesis: - The parkfield experiment is a comprehensive, long-term earthquake research project on the san andreas

Observational Evidence of Creation - . the sky is dark! (olber’s

ESC 102 Evolution of Earth and Life Historical Geology Spring 2011 - . earth systems can you identify them?. when we view

RRTMGP : A High-Performance Broadband Radiation Code for the Next Decade - A 3-year project funded by the office of

HRIBF Now and in the Next Decade - . ?. jim beene witek nazarewicz february 2008. the hribf now has capabilities that are

The Future of Mobile DNA - What's your prediction regarding the mobile industry in the next 3-5 years (2015-2018)? check