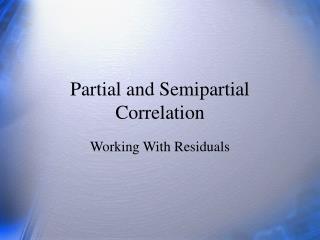 Classification of Seizures - . why do we need to classify seizures?. different seizures affect different parts of the

Partial Orders - . definitions. a relation r on set a is a partial order if it is: reflexive antisymmetric transitive. a

REMOVABLE PARTIAL DENTURES - . terminology. prosthesis. is an artificial replacement of an absent art of the human body.

15.5 Linear Correlation Objectives: - . be able to construct a scatterplot to show the relationship between two