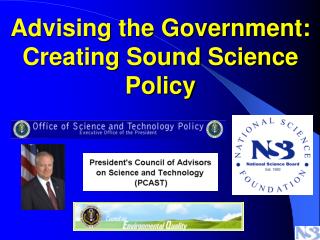 Advising the Government: Creating Sound Science Policy. The Elusive Concept of “Policy”. What is it? Who/what determine it? Who enforces it? How is it changed?. According to Webster…. Policy is… Any plan or course of action designed to influence and determine decisions or actions Unit #1: Foundations of Government - The study of government 1. why study government? government affects many aspects of

Sound Science or Scientific Uncertainty - . lack of sound science is a common critique when attempting to discredit

How to Use and Implement the Academic Advising Syllabus - . jill brown campus advising network western kentucky

The Government and Fiscal Policy - . government in the economy. nothing arouses as much controversy as the role of

ETERNITY OF SOUND AND THE SCIENCE OF MANTRA - . astonishing power of sound. some facts…. big bang theory…. collapsing

ETERNITY OF SOUND AND THE SCIENCE OF MANTRA - . astonishing power of sound. some facts…. big bang theory…. collapsing