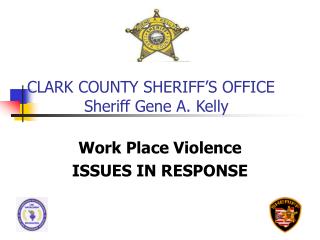 CLARK COUNTY SHERIFF’S OFFICE Sheriff Gene A. Kelly. Work Place Violence ISSUES IN RESPONSE. Violence In The Workplace Statistics. The following are some sobering violence in the workplace statistics involving guns from handgunfree.org. 91.6% of shootings on the job committed by men Los Angeles County Sheriff - . level of effort to incorporate the n-dex xsd to participate in testing. mapped to n-dex

Sheriff David A. Weaver - Appointed sheriff september 2005 appointed undersheriff in 2003 started his career in 1981 over

SHERIFF - . the duties for the office of sheriff some you know and some you that might surprise you. history of the

“how the sheriff becomes the governor of Hawaii !” - . by: justin s timpel. 1. once there was a sheriff named bob