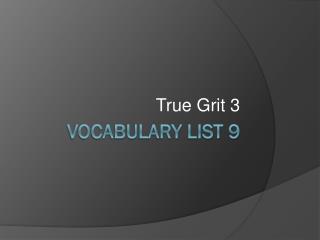 True Grit 3. Vocabulary List 9. beau. Bess married one of the two beaus , and he turned out to be mean and thoughtless. beau. a boyfriend or male admirer “She would dance with no other partner but the handsome man she called her beau whom she hoped to marry.”. smug.

SAT Vocabulary List 1 - . abase behave in a way that lessens others respect for oneself abashed embarrassed, disconcerted

Third Quarter Vocabulary List # 1 - . hierarchy: a system or organization in which people or groups are ranked one above

Vocabulary List #8 - . english 1 english 1 honors. ped. “foot”. impediment. noun something that gets in the way;

Vocabulary List 8 - . by: cristal, dominic, grayson, leslie, and sofi . recede. recede (verb)- to move back or away from

And Then There Were None Vocabulary List 1 - . appareled- (v)- clothed r uminated-(v) to think about, pondered p