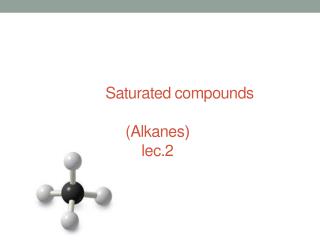 Chapter 2 Alkanes - . hydrocarbon: a compound composed of only carbon and hydrogen. alkanes: hydrocarbons containing only

ALKANE - . reactions. reaction. mechanism. reaction mechanism. is a step by step description of how a chemical reaction

Branched Alkanes - Drill: give the molecular formula &amp; the condensed, skeletal, and complete structures of a

Alkane - . introduction. alkanes are saturated hydrocarbon, that is they contain only carbon-hydrogen (c-h) and

Lecture 4 - . alkanes functional groups structure and nomenclature. organic compounds can be grouped into families by