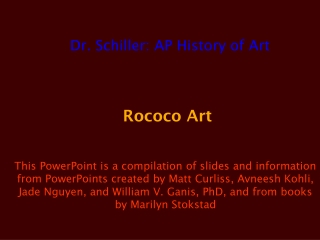 Dr. Schiller: AP History of Art. Rococo Art. This PowerPoint is a compilation of slides and information from PowerPoints created by Matt Curliss, Avneesh Kohli, Jade Nguyen, and William V. Ganis, PhD, and from books by Marilyn Stokstad. “Rococo”. The Rococo Period - . 1725-1775. what is rococo?. derives from the french word rocaille , which refers to the delicate

Rococo Artists of the 18 th Century - . by amber reed and amy busch. giovanni domenico t iepolo. he was born in venice,

ROCOCO ART - . origins . was born in paris where it coincided with the reign of louis 15 th it was out-dated by the 1760s

Chapter Sixteen The Eighteen Century: From Rococo to Revolution - . ••• culture and values, 6 th ed. cunningham and