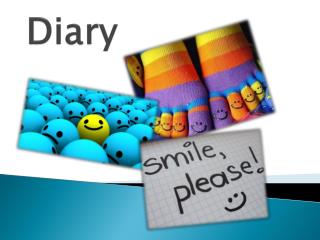 Elisa’s Diary - . comprehension questions and stemming practice grade 5, lesson 5. why might elisa be writing in a

My Imaginary Diary - . by niv hachlili. my imaginary travels to wallland 1. nine meters down, don't look, you might fall.

World War II - . 1939-1945. the road to war. essential question how did dictators acquire and expand power in europe in

Diary Of A Wimpy Kid: The Last Straw - . jeff kinney by, palmer kerch. about the author. the author of the diary of a

The Diary of Anne Frank - . test review. vocabulary. to be meticulous about s omething means to a. be careless b. be