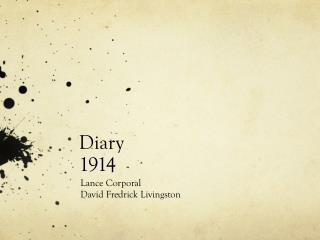 Importance of Writing Diary – Corporate Diary – Executive Diary: - The world is become digitalize but no one denies

RAMADAN DIARY - . presenting some historical incidences that happened in the month of ramadan. * conferment of

My Diary. - My diary. vi bui. today i woke up 6 o’clock. i prepared breakfast and lunch for my family. after that, i

Miar’s Diary - . hi. i’m miar i like keeping a diary to write what happens to me everyday. this is ahmed, my dear