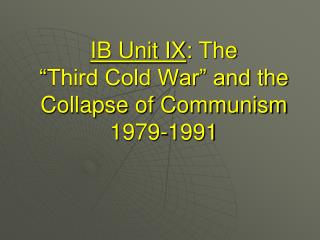 IB Unit IX : The “ Third Cold War” and the Collapse of Communism 1979-1991. The Weakening of Détente. Events begin to confirm Nixon’s comment: “détente does not mean the end of danger … détente is not the same as lasting peace”. Communism and the Cold War - . early soviet union under communism. lenin comes to power by means of a disciplined

The Collapse of Communism - . and the world watched with wonder …. the gorbachev revolution

The Collapse Communism - . and the world watched with wonder …. the gorbachev revolution . mikhail gorbachev recognized

World Communism and the Cold War - . cold war. ww2 was followed by a period of international tension known as the cold

The Cold War 1945-1991 - . state of tension and hostility between the united states and the soviet union because of