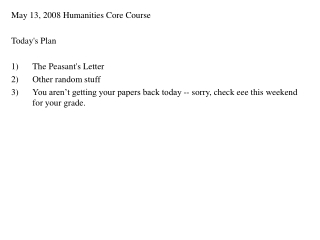 May 13, 2008 Humanities Core Course Today's Plan The Peasant's Letter Other random stuff You aren’t getting your papers back today -- sorry, check eee this weekend for your grade. The Letter. The Unification of China - . ap exam tip. understand the role of legalism in the development of the chinese bureaucracy.

The STUFF in our Classrooms - Table of contents. what is ?stuff?" the background of ?stuff" the research the

This Stuff is Complicated! - . the number one question being asked by business today…. is my company best served by

All About the random stuff you can do - . 2. we promise not to do anything in this document becuase we can’t be

What is Humanities? - . mr. kelly &amp; mr. rasavongxay. the humanities are those academic disciplines which study

Random Numbers - . in today’s lesson we will look at: why we might want a random number whether they really are random

How to Remember All that Stuff - . prepared for plant physiology works for any class. organize the information. arrange

May 13, 2008 Humanities Core Course Today's Plan The Peasant's Letter from Last Week - The vinayak and me article your

Who owns our stuff? - . “everything in the heavens and earth is yours, o lord, and this is your kingdom. we adore you