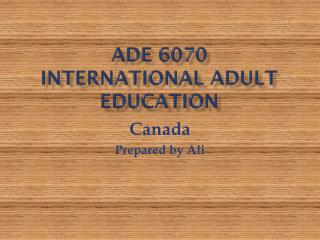 ADE 6070 International Adult Education. Canada Prepared by Ali. Canada. The Canadian Flag. The Maple Leaf. Other National Symbols of Canada. The Arms of Canada This design was approved in 1994. We can find ribbon with the motto: Desiderantes Melirem Patriam ADULT EDUCATION - . report to the portfolio committee 13 th may 2003. systems development. norms and standards for

ADE - . r apid a pplication d evelopment e nvironment. based on labview. outline. mta why rade? the challenge the scope

Adult Education Classes - . throughout advent, pastor thadd will be leading a class that looks at consumerism through the

BCD Adult Education - . develop a market plan for bcd adult education programs that is based on lern principles. al