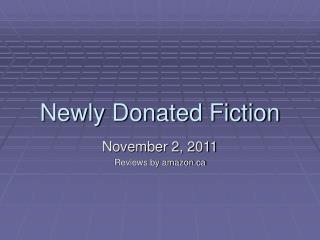 Newly Donated Fiction. November 2, 2011 Reviews by amazon.ca. Does My Head Look Big in This by Randa Abdel-Fattah. Get It Donated! - . karen swam kswam@ctafterschoolnetwork.org april 5, 2008. get it donated!. why are in-kind

Fiction - . fiction. what is fiction?. definition of

Fiction - . what is fiction?. engl 2030: experience of literature—fiction

Fiction - . fiction:. a form of writing that tells a story. fiction is made up, not true. there are several different

Donated By: Friends of Cabrini - Winner receives a full week rental at any one of many luxury locales at properties

Fiction - . categories of fiction. fiction is categorized by word count. other means of categorization by length (page