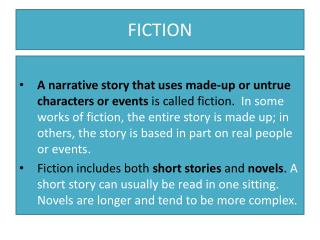 FICTION. A narrative story that uses made-up or untrue characters or events is called fiction. In some works of fiction, the entire story is made up; in others, the story is based in part on real people or events.

STORY: Teaching for Understanding in Fiction - Presentation for ops ell/esl

How to Shelve Fiction Books - . shelving is a critical component of the library. if done incorrectly, books cannot be

1.12 Perspectives on Heritage: Fiction “Everyday Use” by Alice Walker - . analyze a work of fiction to determine and

Science Fiction Vs Fantasy - . a story is a story! both science fiction &amp; fantasy have basic story elements . a

Historical Fiction Book Report - . what is historical fiction. how to pick. think about a time in history or a historical

So, what is Fiction!? - . duh, shrek. fiction is a literary work based on the imagination and not necessarily on fact.

Fiction Genres - . what kind of story are you reading or writing ?. what is a genre?. a genre is a kind of text different

Speculative fiction - . entertaining audiences from cavemen to comicon english 6 ms. levy. what is genre?. from

Fiction - . fiction:. a form of writing that tells a story. fiction is made up, not true. there are several different

Fiction and Nonfiction “The 11:59” and “The Baker Heater League” - Jeopardy. fiction and nonfiction “the