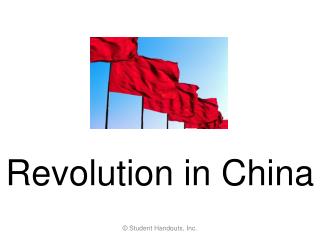 Revolution in China. © Student Handouts, Inc. Fall of the Qing (Manchu) Dynasty. Empress Dowager Cixi (1835-1908) De facto Chinese monarch (1861-1908) “Make me unhappy for a day and I will make you unhappy for a lifetime.” Conservative and anti-foreign

II. REVOLUTION IN CHINA - . a. the fall of the qing the dynasty is now to try to reform itself. new educational system

China during the Great Proletarian Cultural Revolution - . communism in

From Revolution to Reform in China - . china’s civil war . after wwii engaged in civil war nationalists (supported by

China during the Great Proletarian Cultural Revolution - . communism in

The War of Resistance 1937-1945 - . themes: war as destruction, war as development, war and revolution japan’s advance:

How did the Cultural Revolution affect the teachers in China? - . by simon sohn. brief introduction about the cultural

China After the Revolution - The rise of new revolutionary groups. china after the revolution. areas to consider. what

A Bitter Revolution - China’s struggle with the modern world. a bitter revolution. the making of a new china.

The French Revolution in Literature - . katie perko edu-104 may 6, 2005 professor meinke. the french revolution. cause: