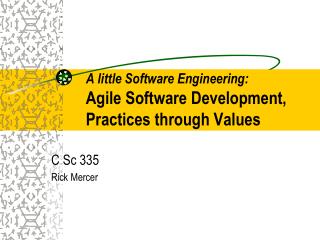 A little Software Engineering: Agile Software Development, Practices through Values. C Sc 335 Rick Mercer. Goal and Outline. Main Goal: Suggest practices, values, and some process for completing a final project on time that is better than any one person could do it in in four times the time