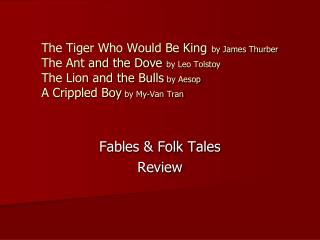 The Tiger Who Would Be King by James Thurber The Ant and the Dove by Leo Tolstoy The Lion and the Bulls by Aesop A Crippled Boy by My-Van Tran. Fables & Folk Tales Review. 1. What is a fable?.

Fables and their Morals - . original powerpoint from: fables &amp; morals at pppst.com

Aesop and his fables - . ashley hill . who is aesop?. aesop was an ancient greek citizen. he is thought to have lived

AMERICAN FOLK ART - . folk-art (fōk'ärt') art originating among the common people of a nation or region and usually