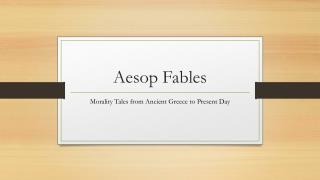 Aesop Fables. Morality Tales from Ancient Greece to Present Day. Who was Aesop?. A slave in ancient Greece, though he did earn his freedom. May have been Greek, but could have been from Ethiopia His name was derived from the Greek term “ Aethiop ” which means Ethiopia!

Activity One: Fables vs. Morals Activity Two: Aesop - . more fables from: http://www.pacificnet.net/~johnr/aesop/. what

Fables &amp; Folk Tales Review - The tiger who would be king by james thurber the ant and the dove by leo tolstoy the

Aesop’s Fables - . the legend tells it that aesop lived during the sixth century bc. he was born a slave. in his

Aesop’s Fables - . home page. the man behind the stories. who was aesop?. how were aesop’s fables passed down?. who

Aesop's Fable The Grasshopper and the Ants - . a moral lesson about the virtues of hard work and planning for the future.

Aesop Fable For Teens - . by: adrienne duckworth. the 2 men who were enemies. two men, deadly enemies to each other, were

Aesop and his Fables - . aesop’s fables. aesop was an ancient greek storyteller who lived around 550 bce. he was also

Fables and their Morals - . original powerpoint from: fables &amp; morals at pppst.com

How To Write A Fable - . advanced language arts. fables…. …a story that teaches a lesson …characters are animals

Aesop’s Fables - . today’s warm-up date: . what is a moral? what is a fable?. today’s objective . define and

Aesop and his fables - . anita, victoria, natalie, shimin. he was a slave in the sixth century, b.c. he was from turkey

Fables - . what is a fable?. a fable is a short, fictional ( nonhistorical ) tale with a specific moral. as allegorical

Aesop - . a nd his fables . aesop. ancient greek storyteller; lived around 550 bc also a slave in the home of a wealthy

Aesop and his fables - . ashley hill . who is aesop?. aesop was an ancient greek citizen. he is thought to have lived

Fables - . what is a fable?. a literary genre a fictional story often features animals with human characteristics may