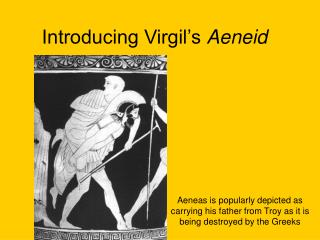 Adapting Spatial and Narrative Elements of a Classical Hypertext to a VRE for Pedagogical Drama - Elizabeth losh, u.c.

The Inferno - Canto viii: the city of dis. the inferno. by: ashley martin, nikki halstead, and dan slaney. virgil and

How is the Underworld Viewed in Classical Mythology? - . what is an underworld?. in classical mythology, it is an

The Adventures of Aeneas - . by: reilly hicks, brittany krugh , and a.j. mcdonald. background info of story. from the

Virgil - . 70bce-19bce. publius vergilius maro. as is often the case, reliable biographical information is difficult to