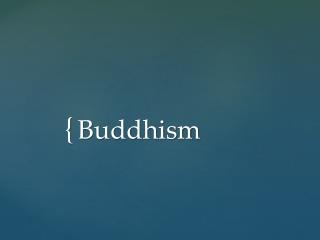 Buddhism. Two branches of Buddhism Theravada: Buddha as a teacher, the old way, gods are not as important Mahayana: Buddha as a god, bodhisattvas are people that have postponed enlightenment to help others When Buddha is thought of as a god, Buddhism is monotheistic. Gods.

Buddhism - . buddhism. by 600 bc, many indians began to question hindu ideas. the brahman priest seemed to care only

Theravada and Mahayana Buddhism - . theravada. what does it mean? who practices theravada buddhism? how many people in

BUDDHISM - . by arsen, sean, leah, damyen, julia, matt. what is buddhism?. buddhism is a religion to about 300 million

Buddhism - . what is it?. monks? bald dudes? orange clothes and beads? temples this crazy thing called

Light and Buddhism - Makha bucha day honours buddha and his teachings, and falls on the full moon day of the third lunar