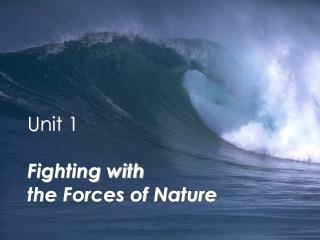 The Big Question: What is it, and why should we care? - . lisa levy and jana wagoner loudoun county high school leesburg,

Chapter 10-Forces - . all forces that affect motion. nature of force. a force is a push or a pull. forces have a strength

Physics 30 Unit B: Forces and Fields - . magnetism. objectives. describe magnetic interactions in terms of forces and

Dog Fighting needs to End! - . dog fighting is a cruel blood sport w here dogs are forced to fight each other j ust for

Do not yell out the answer!! - . which of the following sentences best characterizes the nature of the revolutionary war?

Unit 4: Nature’s Fury - . unit 4: nature’s fury. essential question (copy on a new page in your notebook) what are

May the “Forces” Be With You Web Quest - . lisa tolbert – 6 th grade. objective/standards. purpose: to search and

First, Some Basic Stuff - . forces of nature our friend, the universe … up close and far away. all interactions in

New Unit Forces - . what are forces? how do we represent them in a picture? how do we calculate each force individually?

The Four Forces of Nature - . a brief introduction. the forces of nature are responsible for providing the energy we used

College English ( Integrated Course 4 ) - . unit 1: fighting with the forces of nature. text a: the icy defender.

Unit One Fighting with the Force of Nature - . i. lead-in questions. 1. man and nature, which do you think is more