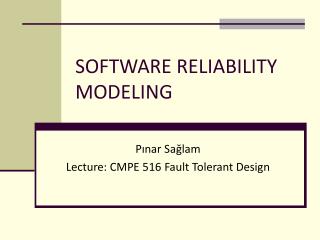 Software Reliability - . categorising and specifying the reliability of software systems. objectives. to discuss the

Introduction to Software Engineering CEN 4010 - . objectives of the class. understand how to produce a high quality

The Unified Modeling Language - . overview of theory and practice of the omg unified modeling language v1.4. what is