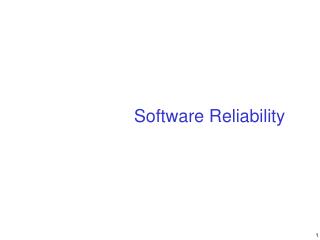 Reliability engineering - . william w. mcmillan. 28 march 2013. in non-functional requirements, what are some of the

Software Reliability - . categorising and specifying the reliability of software systems. objectives. to discuss the

Saturation effect and the need for a new theory of software reliability - Aditya p. mathur professor, department of