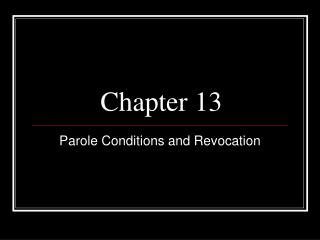 Chapter 13. Parole Conditions and Revocation. Introduction. Parole conditions determine the amount of freedom versus restriction a parolee has Accomplishment of the conditions of parole determine the success of the parolee and the ultimate goal of protection of society