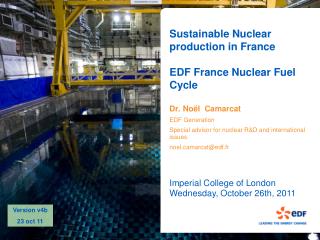 France - . france. by hannah gish. by: hannah gish. about france. they have plains to mountains, forests to farmland.

Research performed at UNLV on the chemistry of Technetium in the nuclear fuel cycle - . 1. separation u/tc and synthesis

What is Nuclear Fuel? - . nuclear fuel is an energy source that results from the splitting of atoms. advantages: helps

The Nuclear Fuel Cycle - . nuclear fuel. nuclear fuel is the energy source of nuclear reactors and an essential element