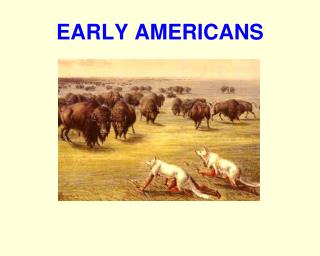 Hispanic- aMERICANS - . by: sabrina brown, silvia butler, ashmanie u. early history of hispanics. in 1920, most hispanics

The Early Civil Rights Movement - . 1954-1957. objectives. 1)examine the lives of african=americans following the

Chapter 1: The First Americans - . prehistory to 1492. i. early peoples. where were the 1 st people migrating from?. they

The First Americans - . prehistory to 1492. migration to the americas. essential question: how did agriculture change the

Chapter 9: The Early Republic - . preview: “in 1789 americans could be divided into those who were rural, largely

9.3 A Time of Conflict - . americans in foreign seas. sailing in the early 1800s was dangerous americans were trading all

The Early Years of War - . life of soldiers . largest group of soldiers were farmers some immigrants also served african

Time to Retire: Why Americans Claim Benefits Early How to Encourage Them to Delay - 2. retiring in america. many

When should we start studying U.S. History? - . investigate the question of when a course on u.s. history should begin,