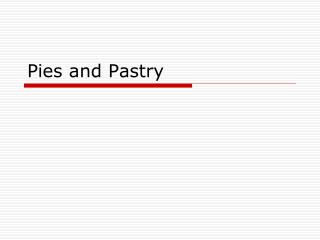 Pastry making - . to gain the best results in pastry making, the correct quantities of ingredients need to be used in the

Home Economics Secondary 3 Making of Pastry - . pastry is the name given to various kinds of baked products made from

Cakes, Pies &amp; Candies - . chapter 24. bell work. have you ever made cakes, pies or candies? what was your

PASTRY - . what is pastry?. when flour, salt, water, and fat come together to form a dough used for pies, tarts,

Pastry - . types and characteristics of pastries and pies. i. 4 main ingredients. all purpose flour – contains gluten

Understanding Food - . chapter 26: pies and pastries. types of pastry. all pastries fall into one of two basic types:

Pastries - . what does the term pastry mean? . a large variety of baked crusts made from dough rich in fats. examples:

Pies and Pastry - . objectives:. review statements banana cream pie is a cream pie and must be refrigerated. it contains