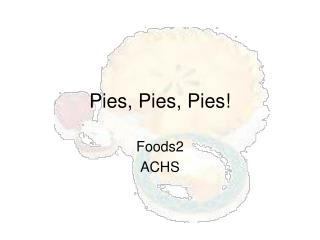 Fornebuâ€™s Most Authentic Pies - Order pizza with no hassle and a wide variety of toppings to choose from, for both

Keith's pies - Get the best pie shop in richmond! visit

Pastry - . types and characteristics of pastries and pies. i. 4 main ingredients. all purpose flour – contains gluten

Pies - . goodston production. history of pies. pies originated in greece . they were honey based fillings and were served

Pies and Pastry - . objectives:. review statements banana cream pie is a cream pie and must be refrigerated. it contains

Pies and Pastry - . pies and pastry. pastry- dough used to make pie crust, tarts, and turnovers pastry is used in