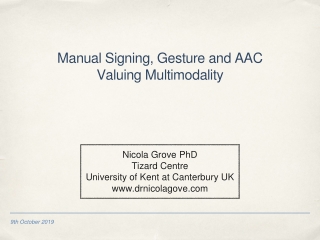 Valuing Places, Valuing Teachers, Valuing Geography - . “the idea of interdependence is old hat to geographers, but for

Multimodality and context-aware adaptation - . quentin limbourg, jean vanderdonckt. context-awareness. what is in the

Valuing - Difference. valuing. events. 2016. session aims:. 8 explore the areas of equality and diversity – both in the

Kress and van Leeuwen on Multimodality - . gunther kress and theo van leeuwen describe the concept of multimodality. they

Movie and Book Signing - . come for the movie and stay for a speech on national security and the cost of war featuring

AAC AND THE IPAD - . charlotte mecklenburg assistive technology team may 1, 2012. “everyone uses words to express