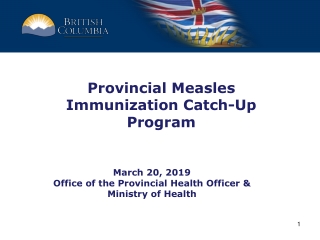 Provincial Measles Immunization Catch-Up Program. March 20, 2019 Office of the Provincial Health Officer & Ministry of Health. Measles Measles is a highly contagious viral infectious disease that spreads through the air by coughing and sneezing, as well as respiratory secretions. Catch-up Plan for Provincial Enrichment in Limpopo - . presented to the portfolio committee 7 august 2012. the ten point

Role of Schools - in Implementation of Measles catch-up campaigns - . meeting of principals of pvt. schools.

Vocabulary Catch up - . (august 20-24) noun: the name of a person, place or thing author’s perspective: is how the

Catch Up, Ltd - . training class. introduction. welcome! 15 minutes for basic orientation what we do our clients. agenda.

“New York Catch Up” - . stage 3 design and craft. seminar 2 – what was covered?. identification and editing of

Lecture 17 (Catch up) - . goals:. chapter 12 introduce and analyze torque u nderstand the equilibrium dynamics of

Half Term Catch Up! - . task: you need to create a group with people that have the same birth month as you! you will