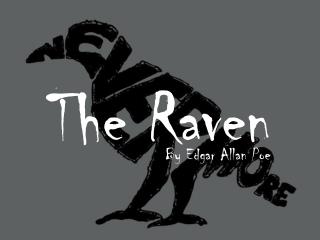 The Raven. The Raven. By Edgar Allan Poe. Main Points.

The Raven - . “ nevermore ”. ---presented by 贾璐. in this poem the raven steadily repeats the word

by Joshua Raven - Lesson 4 creative sentences. by joshua raven. whenever cat noise now try to combine them into a

Poetry - . let’s review first… skim through…. narrative poetry. the raven once upon a midnight dreary, while i

Edgar Allan Poe: Planning for Writing The Raven - . texts. the raven and the peak of tragedy (excerpt) edgar allan poe

by Joshua Raven - Lesson 1 narrative hooks. by joshua raven. list five things you consider to be important in the

Created By: Raven Fisher - . chris brown. he’s 23 he’s a great singer i like that he can sing and i think he’s