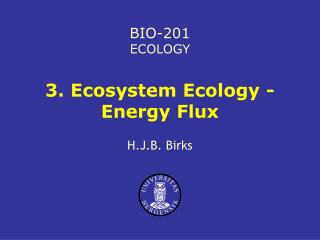 ECOLOGY - . how do i become more productive?. primary production and energy flow. ecosystem ecology. the term

ECOLOGY - . done by: glenn tan (26) 2p4. what is ecology?. ecology is the study of interactions among organisms, and

Review of Ecology Ecosystems Food Chains Food Webs - . ecology. what is ecology? ecology looks at living things and the

Ecology - . what is ecology. ecology – the study of the interactions between organisms and the living and nonliving

What is an Ecosystem? - . 16.1 ecosystems. what is ecology?. what is an ecosystem? all of earth’s inhabitants are woven

Population Ecology - . chapter 19. ecology. study of interactions of organisms with each other and the physical

Energy in an Ecosystem - . objectives: students will describe the flow of energy through an ecosystem. . review from our

Energy Transfer Through an Ecosystem - . objectives: by the end of the lesson you should be able to… -recall how energy

Ecosystem Ecology - . chapter 55. succession. populations ebb &amp; flow over time, but sometimes there is a dramatic

Chapter: Ecology - Table of contents. chapter: ecology. section 1: what is an ecosystem?. section 2: relationships among