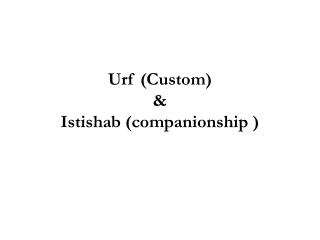 Urf (Custom) & Istishab (companionship ). Urf (custom). As recurring practices which are acceptable to people of sound nature Urf and its derivative Maruf – both occur in Quran, mostly in the sense of "good" adherence to Allah's injunctions (3:110; 7:199) Custom SQL in Tableau - . ashley ohmann june 20, 2013. what is custom sql? what can i do with it? join conditions unions

A New Star Is Born - . before we start… introducing maklee engineering solutions high quality services in the area of:

Looking Out/Looking In Eleventh Edition - . chapter one: a first look at interpersonal relationships. ronald b. adler,