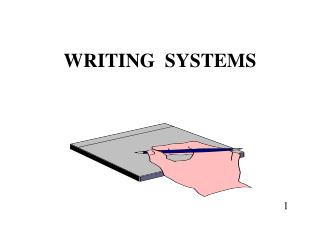 writing - . planning. discussion. discuss in groups of four what li daiyu and liu qian saw and heard during their travel

Writing systems - . the most excepted system is the one which we are using it is called the ba be bo system. other

Writing - . how can you make your writing great? use the elements of the 6+1 writing

Japanese Writing Systems - . how many different scripts are there? . seventeen:  はじめてメイク入門 jr

Writing Systems Pt 2 - . for each situation, write two equations that fit the situation. . 1. the perimeter of a

WRITING - . study the chart carefully the write a paragraph of 100-120 words, describing the information in the chart.

World’s Writing Systems - . priyankoo sarmah dept. of hss. languages and writing. how many languages are there in the