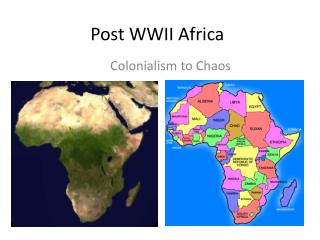 Post WWII Africa. Colonialism to Chaos. Rebirth of Cultural Identity. Negritude Movement- starts in the Caribbean as a carry over from the Harlem Renaissance & fosters the development of African studies Celebrates African heritage & culture through the French language. Colonies to Countries. Post-WWII De-Colonization in Africa - . senegal: start of the negritude movement. movement to celebrate traditionalism in

Post WWII - . the cold war and rise of the civil rights movement. questions. what was the “cold war”? how would you

Post WWII - . containment at home &amp; domestic policies do now: why did the united states intervene is guatemala.

Post WWII - . post war treaties. wwi – wwii – . conferences. during and after wwii a series of conferences were held

Africa and WWII - . military actions in africa. invasion of ethiopia (and subsequently libya and british somaliland) by

Post WWII adjustments - . throughout most of the economic crises of the post world war ii period, governments in latin