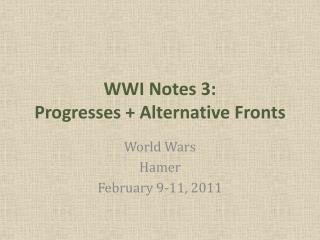 WWI and WWII Notes - . review. post ww i. america turns to isolationism -- do not get involved in the political or

WWI Day 1 Notes - . causes of world war i. objective : to figure out how all this chaos started!. m a n i a. world war i

U.S. Entry into WWI notes - . u.s. neutrality. most americans didn’t want to get involved in wwi divided loyalties: b/c

Notes 3 - . the road to the civil war. 7. conflicts over slavery and compromises slavery in louisiana purchase? manifest

WWI Notes 2: The August Madness and the Beginning of WWI - . world wars ms. hamer february 4, 2011. myth of the august

Notes 3 - . chapter 8- lesson 1. who were the greek gods. 12 most important gods/goddess lived on mount olympus. humans

Notes 3 - . the road to the civil war. 7. conflicts over slavery and compromises slavery in louisiana purchase?

Chapter 3-3 Notes - Vectors have x and y components. velocity and displacement are vectors and so they can be broken down