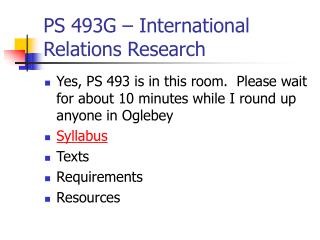 Ewen C. D. Todd Advertising, Public Relations and Retailing Michigan State University - What we can learn from the role

Realism: Power and the Security Dilemma in International Relations - . po 201: introduction to international studies and

Chapter 12: Postcolonialism by Siba N. Grovogui - Learning outcomes. after this lecture you should be able to: understand