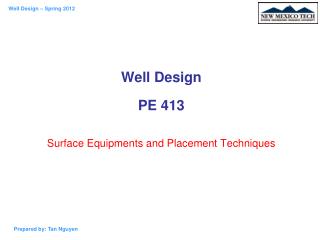 Well Design PE 413 Surface Equipments and Placement Techniques. Surface Cementing Equiments. Jet Mixer. Dry cement must be mixed with the proper amount of water to ensure that slurry and set-cement properties are as designed.

Well Design - PE 413 Formation Pressure - During a period of erosion and sedimentation, grains of sediment are

Well and latrine placement in slum - Diarrheal illnesses module flowsheet. setting: dhaka, bangladesh. back to the

Surface Decoration Techniques - . -click on the hyperlinks for a video demo. during this presentation, write down on the

Surface Decoration Techniques - . during this presentation, write down on the chart the process for each technique, which

Curve and Surface Design - . cvglab. goals of the chapter. to develop tools for representing and designing curves. to

Microphone Physical Design and Placement - . microphones. a microphone is also classified by how it is physically

Intermediate 1/2 PE Skills and Techniques - . lesson 1. gymnastics!. our aim during gymnastics…. is to improve our