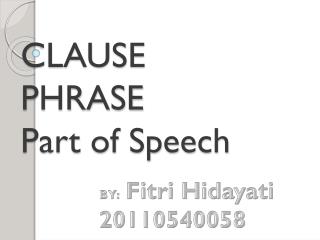 CLAUSE PHRASE Part of Speech. BY: Fitri Hidayati 20110540058. Independent Clause. Also called main clause (induk kalimat) is a series of words containing a subject and predicate which has had a perfect understanding (obviously), and can stand alone, that is not dependent on another clause.

Phrase and Clause Sort Directions - In the envelope, find the definition of a phrase and write it in your journal find

The Clause v/s The Phrase - . the difference?. phrase – i s a word group that does not have a subject and a verb that

Part of Speech - . definition. examples. identified part of speech in sentences the only thing we have to fear is fear

Part-of-Speech Tagging - . l545 spring 2010. pos tagging problem. given a sentence w1…wn and a tagset of lexical

Part of Speech Tagging - . chapter 5, part 2. stochastic tagging. based on probability of certain tag occurring given

Part-of-Speech Tagging - . l545 spring 2013. pos tagging problem. given a sentence w1…wn and a tagset of lexical