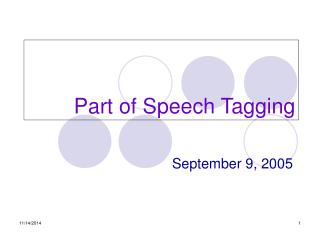 Part of Speech Tagging. September 9, 2005. Part of Speech. Each word belongs to a word class. The word class of a word is known as part-of-speech (POS) of that word. Most POS tags implicitly encode fine-grained specializations of eight basic parts of speech:

Chapter 8. Word Classes and Part-of-Speech Tagging - . from: chapter 8 of an introduction to natural language processing,

Some Advances in Transformation-Based Part of Speech Tagging - . a maximum entropy approach to identifying sentence

Categorizing and Tagging Words - . chapter 5 of the nltk book. plan for tonight. quiz part of speech tagging use of the

Clear and present danger (test) - . a legal interpretation that reconciled two views of the first amendment right of free