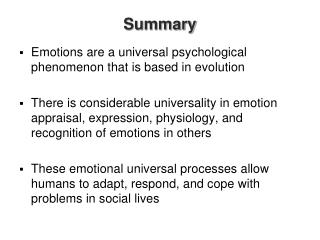 Summary. Emotions are a universal psychological phenomenon that is based in evolution There is considerable universality in emotion appraisal, expression, physiology, and recognition of emotions in others

Section 15.1 Summary – pages 393-403 - . charles darwin and natural selection. the modern theory of evolution is the

Plankton Summary - . plankton can’t control their location and are moved about by wind, waves, currents and tides.

Comprehensive Guideline Summary - . guidelines for the use of antiretroviral agents in adults and adolescents march 2012

Measuring Child Outcomes with the Summary of Functional Performance: An Introduction - . kathy hebbeler the early

Transition to Choices On Line Summary Oct 2010 - . introduction. this summary is a highly abridged and resorted version