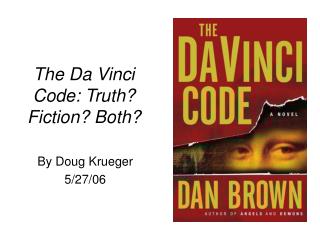 The Da Vinci Code: Truth? Fiction? Both?. By Doug Krueger 5/27/06. A Novel, A Movie, A Controversy. The Da Vinci Code is a mystery novel and now a movie. The author is Dan Brown. The book was published in April 2003 and has remained a best-seller.

The Da Vinci Code and The Gnostic Gospels Fact or Fiction? (Part 2)

FACT: The Priory of Sion –a European secret society founded in 1099 –i s a real organization. - Is the da vinci code

The Real Da Vinci Code - . 6-21-06. quotes from da vinci code. &quot;almost everything our fathers taught us about

3 Lies and a Truth - . read the following 4 statements about mrs. mack’s broken ankle/leg and decide which one is true!

The Truth About Tea - . the antibacterial effects of green tea: bottled vs. brewed. background research. green tea has

The Da Vinci Code Faith, Fact or Fiction - . just in case you haven’t noticed, a phenomenon known as the da vinci code

THE DA VINCI CODE - . constantine, the council of nicaea and the bible. historian leigh teabing: “what i mean is that

The Da Vinci Code film - Seek the truth! the priory of sion according to the dvc a real organisation founded in 1099 to