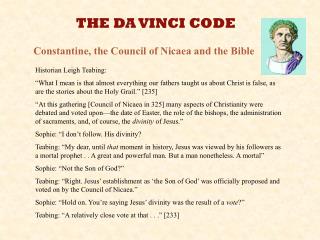 THE DA VINCI CODE. Constantine, the Council of Nicaea and the Bible. Historian Leigh Teabing: “What I mean is that almost everything our fathers taught us about Christ is false, as are the stories about the Holy Grail.” [235]

Leonardo Da Vinci - . ann-hunter carraway. leonardo da vinci. “i have been impressed with the urgency of doing. knowing

The Da Vinci Code and The Gnostic Gospels Fact or Fiction? (Part 2)

Leonardo Da Vinci - . am 6 th grade mr. kyle. questions and answers. leonardo da vinci was a pivotal philosopher of the

Thousands Of New Testament Manuscripts Say ‘Da Vinci Code’ Is But A Work Of Fiction! ARTHUR DURNAN MINISTRIES OF

The Da Vinci Code film - Seek the truth! the priory of sion according to the dvc a real organisation founded in 1099 to

Da Vinci Code Debunked - . may 15, 2006. introduction. panelists irene mariana adam ann why is there a problem; after